180 Comments
By Will Jessop General

Fixing the ‘Memory card error’ on the Canon IXUS 400/S3

The day after Holly was born my Canon IXUS 400 camera started giving a ‘Memory card error’ and refused to save anything to the compact flash card. I assumed that this meant that there was an error with the memory card so I bought a brand new one and was slightly cheesed off when the IXUS gave the same ‘Memory card error’ message after installing it.

A bit of googling revealed that a number of people have had this error with the Canon IXUS s3 and that the problem was solved by opening the case and removing the internal battery. The specs of the IXUS 400 are similar to that of the S3 and the chassis are practically identical, so I guessed they may well share a fair few components, and therefore problems. I was not that keen on the idea of doing this however until I discovered that Canon wanted to charge me nearly £100 to fix it (including the cost of postage).

It seems a bit cheeky asking for that amount of money to fix a problem that is effectively a design flaw, so I went for the DIY option and it seems to have worked, I have only taken about 20 photos, but as the camera would not allow any to be taken before, this is a significant improvement!

For anyone wanting to do the same here are some photos of what to look for. This one is the back of the camera with the case taken off.

And this one is of the front of the camera. The battery is under the circled bit of metal film which was stuck down and had to be peeled off to get to the battery which is mounted in a clip just underneath. 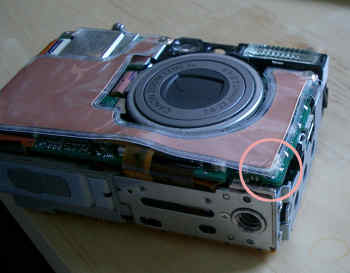 The battery popped out really easily with a small flat screwdriver. I put the battery back in, put the camera back together and the camera worked (I had to format the memory card first).

Some tips if you are going to try this:

Don’t attempt this if you are not confident in doing so, if you break your camera it is entirely your fault, and this will probably invalidate your warranty (mine had expired already). This whole experience has shaken my confidence in Canon cameras, I will be looking at alternative makes for my next purchase.